Authorize spending for next fiscal year, May 1 2020 through April 30 2021, as shown in the proposed budget below (change vs previous budget is with respect to the previously authorized budget, which was prepared 2/5/20):

We’ve received more generous contributions and advance payments of membership dues, which will be on hold until we re-open. We also got the disaster loan advance (really a grant) to small businesses, and have an application in for the payroll loan, which could also a grant.

We’ve paid for next year’s insurance and most of our other expenses for this fiscal year, which ends on April 30.

We’ll need an interim budget so we can approve spending during the period before we re-open.

Here’s the latest tally on the current budget, including spending vs the approved amount of spending. The Department of Boating and Waterways (DBW) figures need some explanation. We’ve already requested $3,758 reimbursement from DBW for windsurf sails we purchased, but they’re slow, and might not even pay this before May 1. We can’t request reimbursement for the $8,269 deposit we put down on two JY’s until they’re fully paid, which will cost us another

$0 of DBW spending remaining for dinghies. All the DBW related windsurf purchases are complete, and so is the payment of sales tax on purchases we’ve made.

Big thanks to everyone for their hard work, and for donating money and renewing early!

Since our commodore’s appeal went out, we’ve received over $50,000 in donations and dues paid while we’re closed and early locker renewals, and the money is still coming in.

DBW has reimbursed us $5,195 for the 6 novice windsurf boards we bought, and will also reimburse us $3,758 for the 8 Quest mainsails we bought.

We are deferring until at least May payment of the remainder of $8,268 for buying two new JY15 sailboats to complete the purchases under last year’s grant.

DBW awarded us a grant for about $22k for mostly dinghy-related equipment in the current year, and we’ve signed the contract.

We’ve applied to the feds for a low interest loan for small businesses, and to the City of Berkeley for a small business continuation grant.

We’ve also asked our insurance broker about relief on the $13,592 marine and general liability and commercial property insurance bill for 4/14/20 – 4/13/2021 that we haven’t received yet, and the City of Berkeley about relief on rent.

We hope our dayleaders will get the promised federal compensation and payments, as well as conversion of work study grant funds to financial grant payments.

We’re closed until May 3, and maybe longer, and will be holding off on expenses until then.

Big thanks to everyone for their hard work, and for donating money and renewing early!

As of 3/22/20 we have $4,605 in cash, down $3,392 from last report 3/8/20. Now that we’re closed, regular dues income is likely to fall considerably. DBW is still sitting on $8,953 in reimbursements for the 6 novice windsurf boards and 8 Quest mainsails we bought (accounting section is frozen). We are deferring until at least May payment of the remainder of of $8,268 for buying two new JY15 sailboats to complete the purchases under last year’s grant. DBW notified us that they’ve awarded us a grant for about $22k for mostly dinghy-related equipment in the current year, but we’re holding off on signing the contract until we see if we’ll be able to front the money.

The budget is completely inapplicable since we are closed and don’t know when we’ll be able to reopen, but if we can reopen April 7 and/or members take on paying our insurance and other large bills now for reimbursement later and/or DBW reimburses us for the novice boards and mainsails, we’ll stay afloat. Big thanks to everyone for their hard work, and for donating money!

As of 3/8/20 we have $7,998 in cash, up $444 from last report 2/9/20.  DBW is sitting on $8,953 in reimbursements for the 6 novice windsurf boards and 8 Quest mainsails we bought (accounting section is frozen). When we get it, we’ll need to pay the remainder of $8,268 for buying two new JY15 sailboats to complete the purchases under last year’s grant.  No word yet on this year’s grant award.  We finally got $729 back from Fedex for their screw up on customs duties for windsurf sails we imported in April 2019.

The budget numbers below reflect the recent changes, and the funds remaining in the dinghies and general budgets are separated into funds earmarked for DBW spending and not earmarked.  The dinghies budget has less than $1k of non-DBW funds after paying off the JY’s and Quest mainsails, while the general budget has $1,523 for sales tax on the DBW purchases.

In February, we took in a hell of a lot of money, prolly because of heavenly weather. 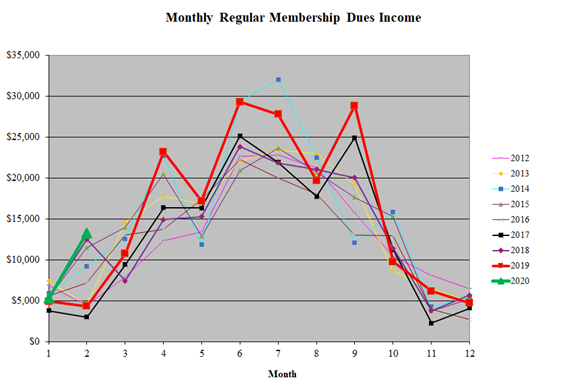 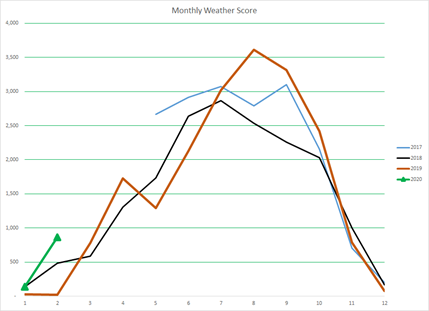