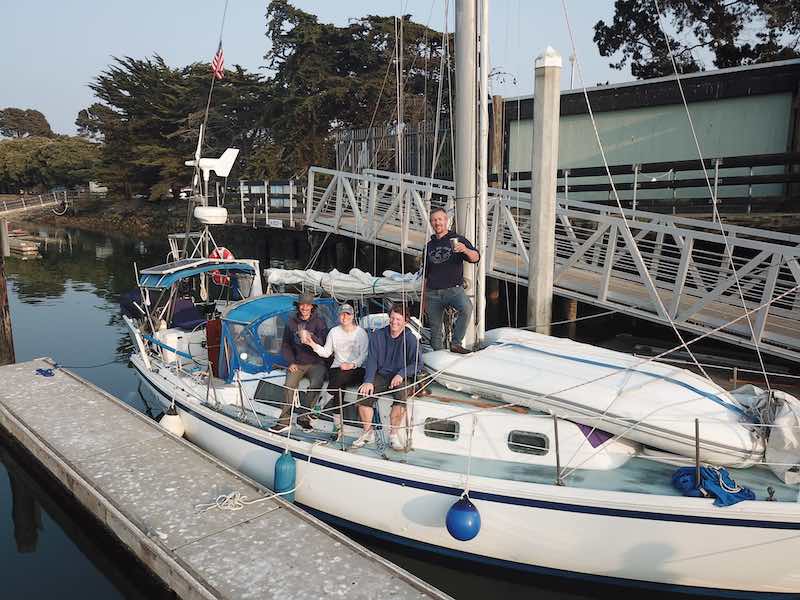 Maybe having bananas on the boat was a mistake, but Nick really likes bananas!  Morning of departure the goal was to take off by 9am but sail boats never depart on time and the boys dealt with some Y valve issues with the head all morning.  Nick’s mom came out to Anacortes to wish him farewell and stock up on provisions for two weeks - we were definitely never hungry and ate quite well on the trip.  Thank you Chris!

Wild Rover departed from Cap Sante Marina on Saturday September 5th.  At the marina Nick’s neighbor, Rubicon III, was doing the same trip down to Berkeley Marina which was nice to know a friend heading in the same direction.  Rod (owner of Rubicon III) paid Commander’s Weather Corporation to put together a detailed forecast for the sail down - which was very on point and made specific recommendations for the sail down.  Getting out of the Salish Sea the water was glossy so we motored most of the way - trying to avoid debris, birds and kelp forests.  The coast line included many coves to explore and forests.  The crew included Graeme, Ryan, Mariya and Nick for the first half of the trip.  We were all excited and stayed up chatting/taking pictures all day as Graeme worked and re-worked the watch schedule for 24 hour sailing he eventually realized there was 00 and 24 hour - so the math did not add up.  During the day we did 3 hour solo watches and after sunset each individual only had 1 hour by themseelves, and 2 hours of overlap with the person before then after.  So if Ryan was on watch 8pm - 11pm then 8-9pm he overlapped with Mariya and 10-11pm he overlapped with Nick to minimize desire to fall asleep and have extra hands for wind changes/sail changes etc.

We kept strict rules that anyone leaving the cockpit had to be tethered in - and nobody was allowed to go up if they were the only ones on watch.  Day 2 we woke up to a foggy morning, swell was pretty tall and kept building up as the sun came out and wind came up.  A shark passed by us - Jaw soundtrack. The first day included a lot of motoring so the boys refilled the fuel, spilled some diesel on the boat (which we carefully cleaned up with the diapers and buckets) and fixed the head.  Off to a productive start - the winds picked up and we had a lovely sailing evening.  In the evening the wind picked up pretty quickly - within minutes we would be adjusting sail from the 135 full genoa … to reef the genoa, to one reef on main sail, well lets put in a second reef, and time for storm jib.  After getting the second reef in on day 2 - we actually never un-reefed the rest of the trip.

Day 3 was a beautiful day!  We saw a dolphin swim alongside the boat - showing us how blue and transparent the water is.  Nick was concerned about the shrimp/crab pots so we stayed further offshore - we were about 20 miles away from the coast cruising over 5000 feet of water at times.  The sun was out and the winds were steady, towards the evening the winds again started to pick up quickly from the East so we reacted fast and were prepared with the storm jib (which we ended up keeping packed up on the bow and already attached to the halyard) and double reef learned our lesson from the night before how quickly the wind may come up.

The swell and winds continued to build. At this point Ryan is puking overboard, Nick is happily eating a grilled sandwich, Graeme looks concerned and Mariya is taking pictures and upset she cannot get a great shot of the sunset because Ryan keeps being in the picture.   Then the wind came up even more and we took down the mainsail and sailed storm jib alone.  Now the sun is down and the wind is coming up.  Eventually we end up taking the storm jib down (bare poles) and trying to motor against the wind to get us closer to shore - this was a strong east wind.  Then Nick says, “wouldn’t it suc.k if the motor dies.”  Whelp, a few minutes later the motor dies.  Bare poles, large swell, very very windy - Nick is steering, eventually finds he has the wheel hard over and the boat feels pretty stable.  He tells Graeme he is off shift and can go under - ties down the wheel and stays in the cockpit to observe how the boat handles.