Subscribe to updates from author Unsubscribe to updates from author
Joel is a Junior Skipper, working on his Senior Skipper rating. Joel grew up in rural Virginia on a reservoir and at 14 taught himself to sail a Snark sailboat. After a bad ice storm fell a pine tree that totaled his boat, Joel took a hiatus from sailing for about a decade until he came across the Cal Sailing Club.

May Junior Skipper Fast Track - The Signing of the White Cards 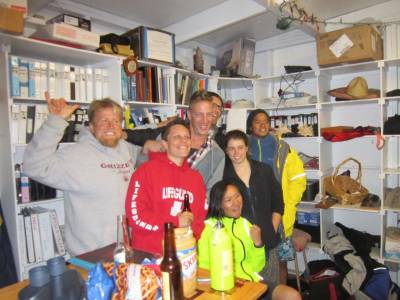 Anthony Lunnis and I organized the May Fast Track for our senior project. We spent two months putting it together by asking volunteers to teach, cook, and/or test, as well as blasting the Cal Sailing listserv. We suggested to every potential Junior that they should join in to get their rating. And sure enough, our excel lists soon filled up with potential participants and volunteers.

Fast Track went off without a hitch…until the last day…when the fire department showed up.  They had responded to a call about lots of capsized dinghies in the south sailing basin.  Yves is bent over the window of a fire truck in front of the Yard.  “Well, Joel here, the Fast Track coordinator, contacted Berkeley Fire Department to let them know we would be doing drills, including capsizing, and not to worry.”  I speak up, “I even spoke with a supervisor.”  The Fireman nods, “Oh, well there is no supervisor on duty tonight, that’s why. This is our first call all week. No worries.”

I scamper away and down to the dock just in time to hear Jennifer shout, “Be careful, don’t kill another puppy!” as Nathaniel steers a Bahia toward the dock, going a little hot and then S-turning to blow off speed and gliding to a soft landing.  “Killing puppies?” I ask.  Jennifer responds, “People have been coming in too fast for docking” as if it makes perfect sense to equate hitting the dock with killing cute baby animals. Maybe they’re supposed to picture a puppy between the boat and the dock? Those poor, poor puppies! “We will be working on slow sailing and docking at the next advanced class,” she warns.  For the sake of the puppies, of course.

Soon, the sun has set behind Mt. Tam and Hs. Lordships restaurant, making the water radiate a deep blue.  The air feels a bit cooler and the last dinghy is on the hoist and swinging around to face its trailer. As it is pushed into the yard I tell the shivering, exhausted, future Junior sailors, “go change out of your wetsuits.  We will take care of the sail covers.”

“Are you sure?” they ask, hesitant, as if this still part of their junior test.