Wear Your Lifejacket To Work Day 2017 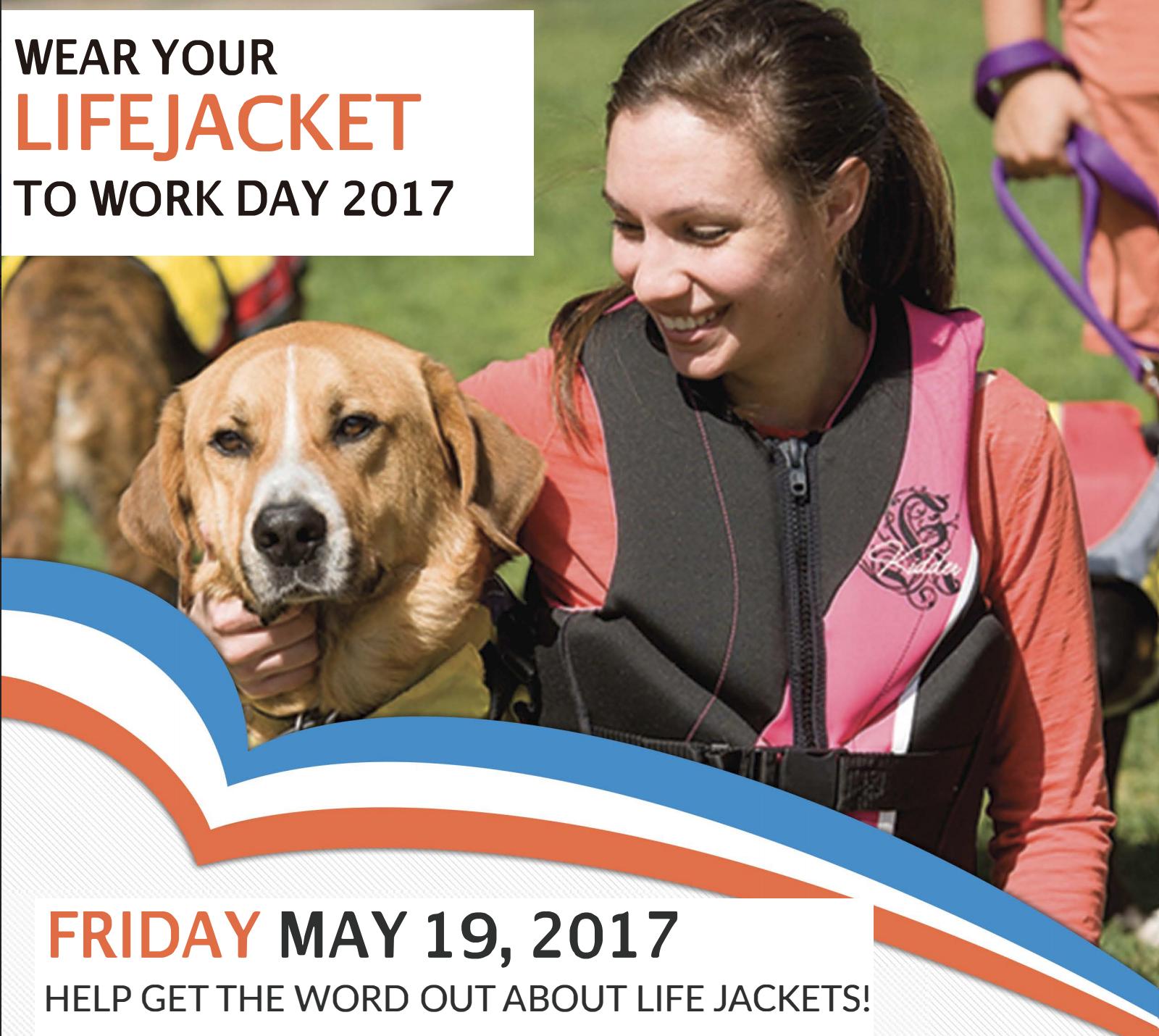 Join your colleagues, peers, and friends around the world in demonstrating how easy it is to wear a life jacket - even at work!

Just prior to National Safe Boating Week and the day before the eigth-annual "Ready, Set, Wear It!" event, we are asking you to take a photo of yourself wearing your life jacket at work on May 19!

Don't forget to post your photo to Facebook.com/ReadySetWearlt or tweet @ReadySetWearlt and @CalSailing using #readysetwearit to show off your style.

Candidate Senior sailors need to own their own VHF radio. This guide is designed to give some basic orientation on what to look for when shopping for your first handheld VHF radio. This guide is not a generic guide but designed explicitly for use at the Cal Sailing Club, for brief recreational use on dinghies and keelboat cruises inside the bay area. You need a radio for basically two things: contacting the day leader and, in an extreme situation, contacting the Coast Guard. Senior skippers need to have a radio with them in order to sail outside of the Junior area, and will often use them when cruising with other Seniors.

Understand waterproof rating Most models are water proof and submersible, meaning they can be dropped into water and still be functioning when recovered. JIS4 means that the radio is barely splash resistant, JIS8 means the radio is submersible, it can stand for up to 30 minutes below 5' of water. Be careful when reading the descriptions when shopping because it's not uncommon to find JIS4 rated radios claimed as being 'waterproof'.

Floating or not? You  want the radio primarily for your own safety, and you want to make sure it is securely attached to you at all times. It isn't going to help you  if you leave it on a keelboat but fall off, or you lose it while  sailing but don't realize it (a pretty likely occurrence if it isn't  secured).  For both dinghies and keelboats, assume  that you'll end up in the water, so the radio has to be securely attached to  you. CSC keelboats have a radio on board, so the portable one is for extra safety. The models that also float can be easier to recover in case they get detached from you but they can be slightly bulkier and more expensive. The extra cost  of a floating one can be easily recovered the first time the radio drops in the water (which is not so unlikely, according to stories heard at the club).

Whether you decide to get a floating or non-floating model, make sure that the radio is securely tethered to your gear so that in a capsize it won't be ripped off of you. In general, do not rely  just on the clip that attaches the radio to your life vest. In case you go for non-floating, you may want to get a waterproof case for it with enough buoyancy. You have to be careful, though, and take the radio out of the case when you're not using it otherwise the water (vapor) in the case can corrode the radio. The case needs to be securely attached to your life vest.

Power, screen, control and other features to look for 5 watt should be the minimum transmitting power. Rechargeable NiCad or Li-ion batteries are usually provided by the manufacturer, it's nice to have the possibility to put in regular AA batteries, too. Dual scan means that the radio will scan Channel 16 along with another Channel (69 for CSC). This is important because technically any boat under way is required to monitor Channel 16. Any boat carrying a VHF, whether  required to or not, is required to monitor Channel 16. So when you're  out the bay listening to our Channel 69, you have to also monitor Channel  16. The Dual Scan feature does this. Many VHFs have a triple scan feature, which monitors both Channel 16 and Channel 9 (the standard hailing channel). Squelch  is widely used in two-way radios to suppress the annoying sound of channel noise when the radio is not receiving a transmission. Most handheld radios have a separate squelch control to set the threshold to the actual noise that's on the channel, which can vary. Control knobs to adjust volume are generally more usable than push buttons: think you may be wearing gloves or have your fingers slightly incapacitated when you really need to use the radio. If you carry the radio in a case, push buttons to control the radio volume can be better. Make sure that the screen is very visible also in daylight. Backlit displays are useful in low light. Some radios have water-activated lights that should make the radio much easier to locate in the event it goes in the water in low light conditions.  A lock mode prevents the buttons to be operated when not needed.

Pictures from the Regional Rescue Drill 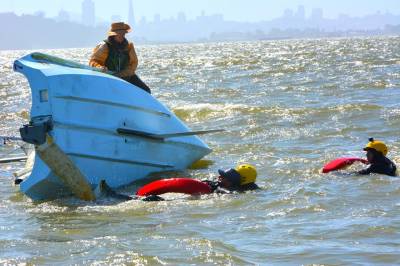 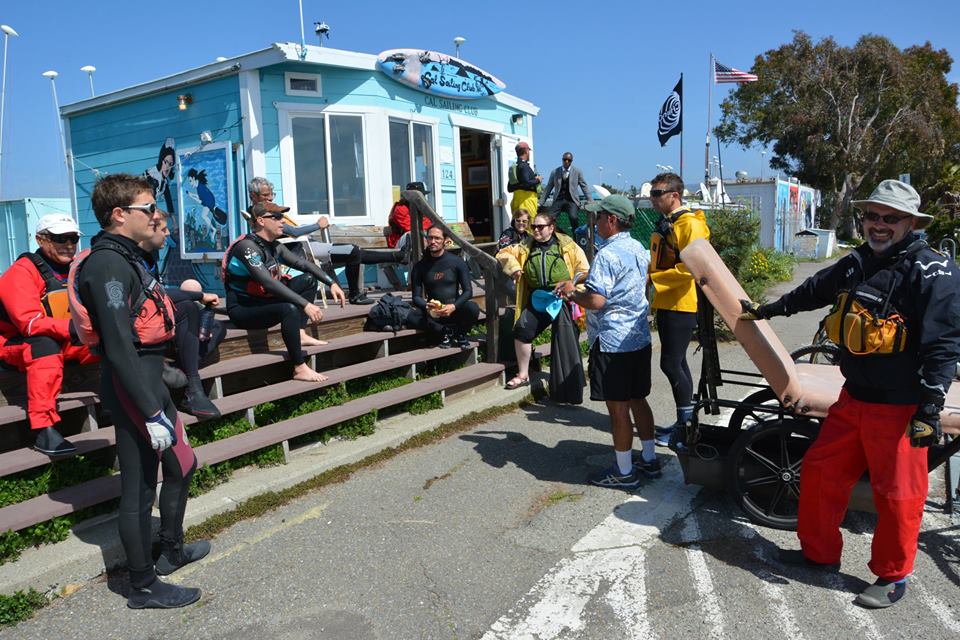 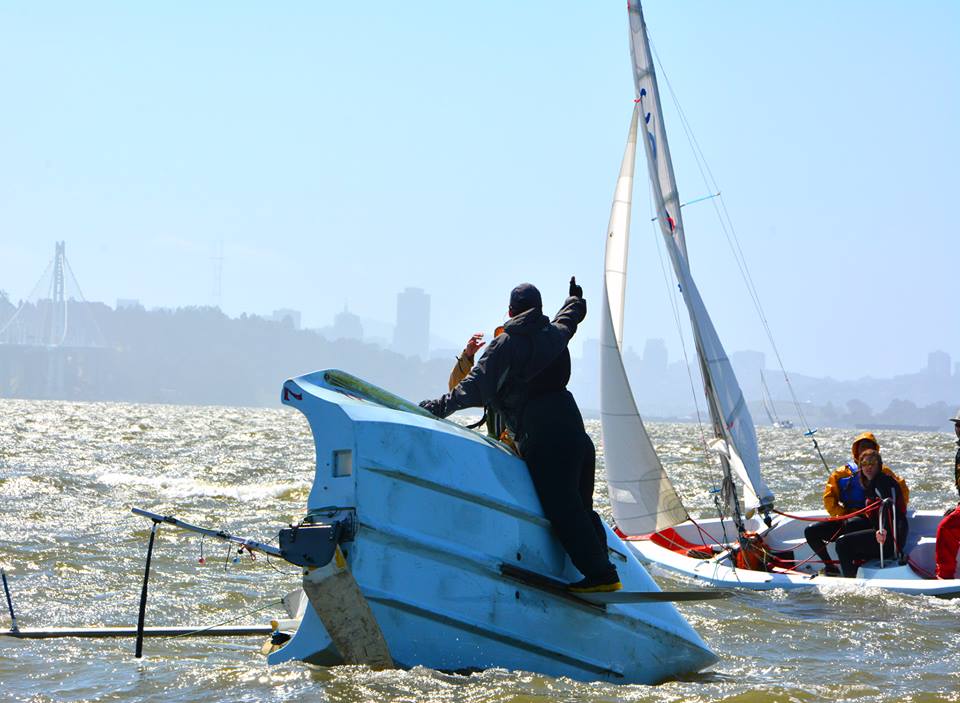 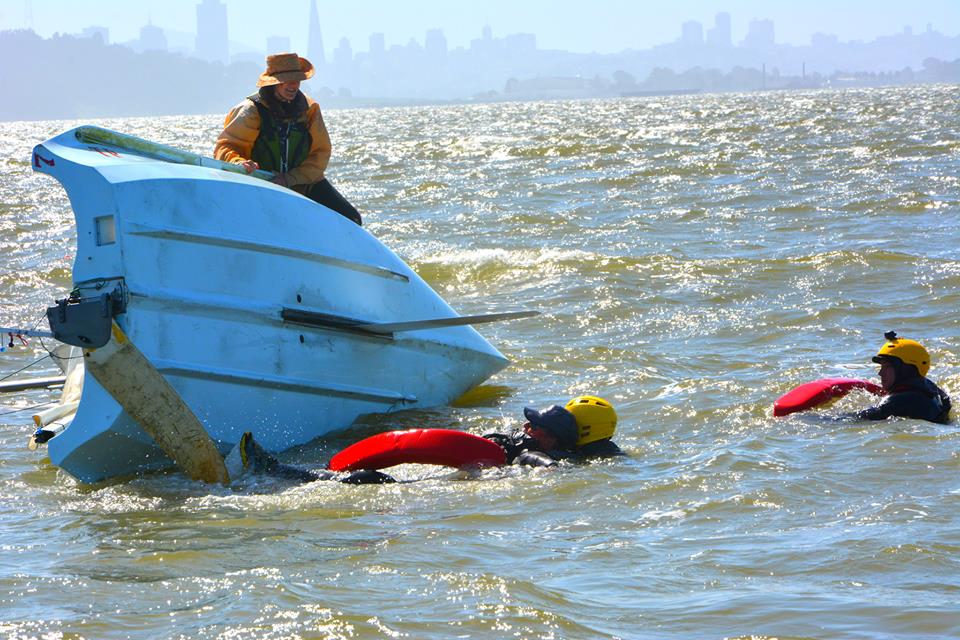 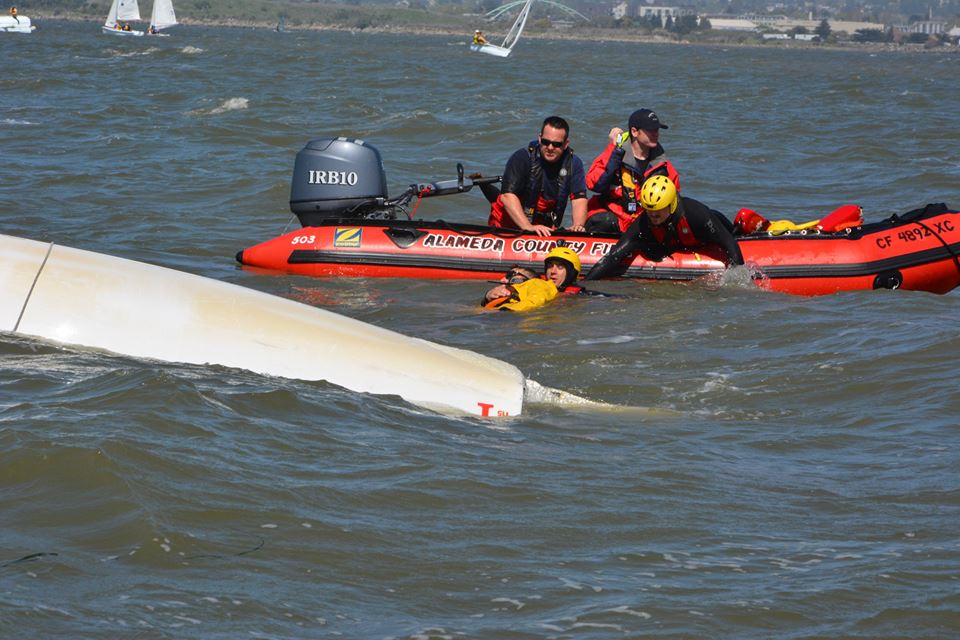 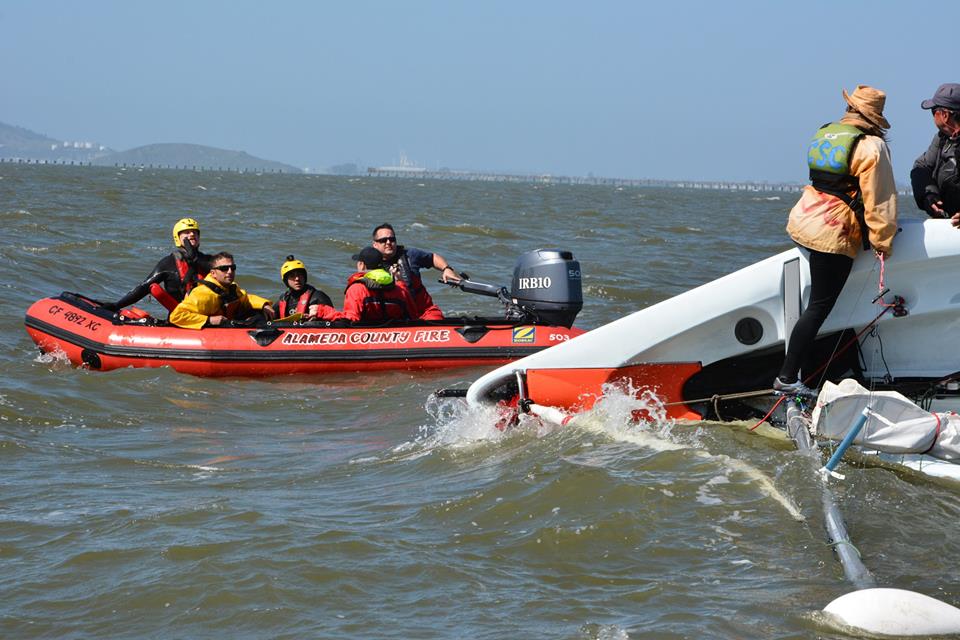 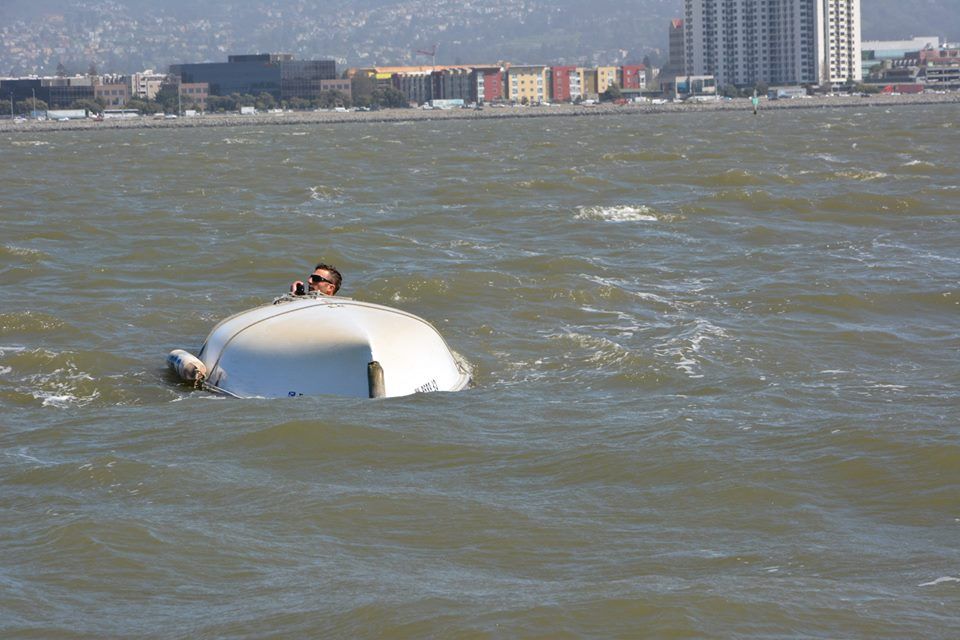 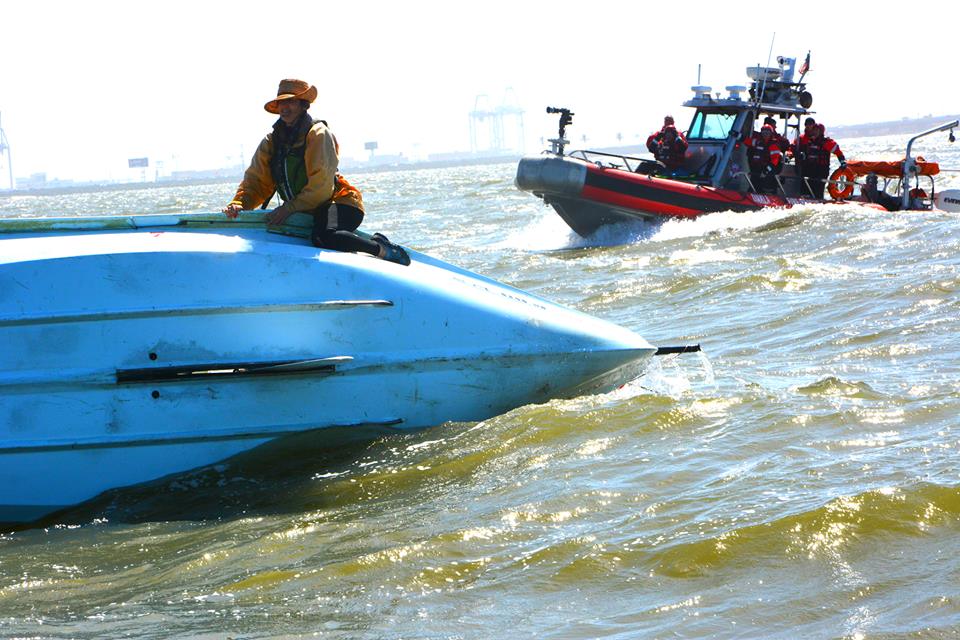 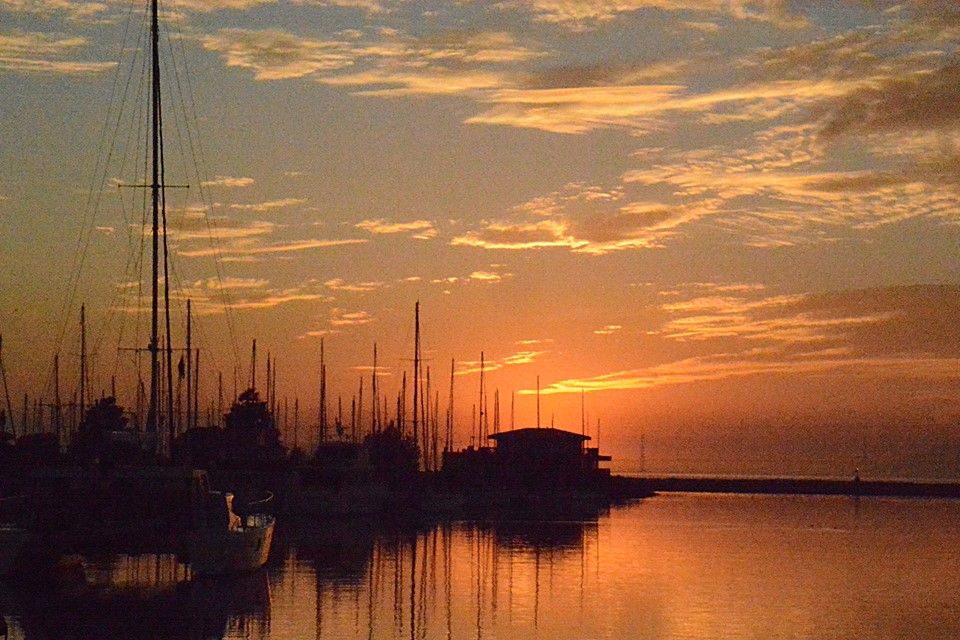 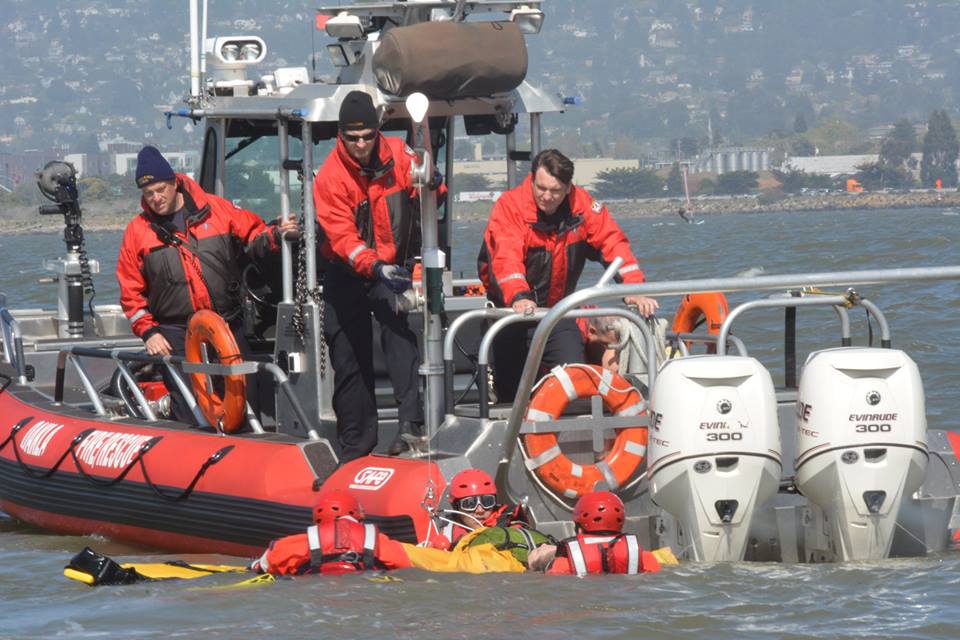 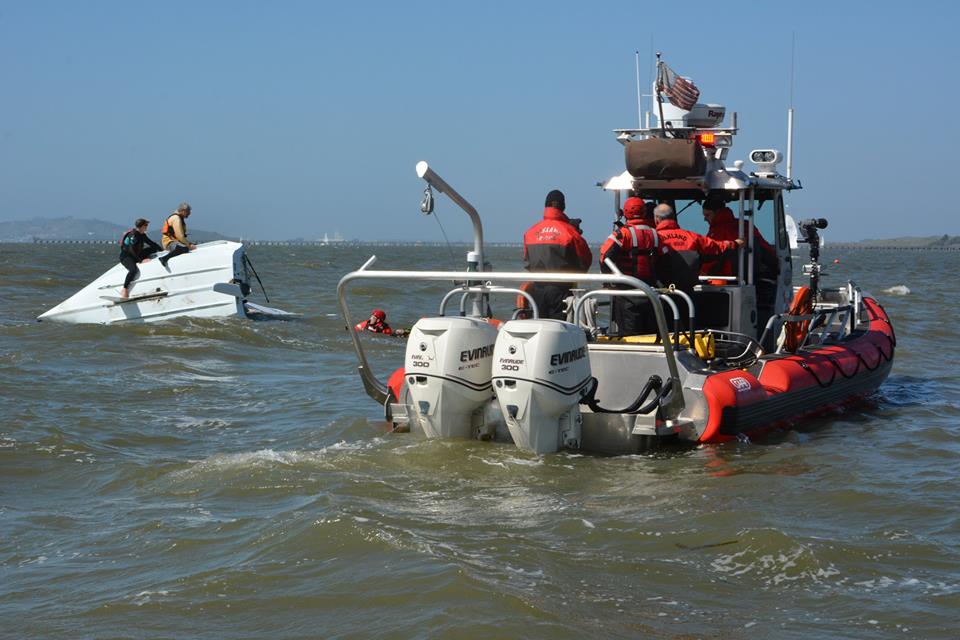 Good job everyone involved with the regional rescue drill out on the water on Friday March 21.  We had multiple fake injuries and scenarios within the drill to help the agencies improve their water skills.  There will be  a formal debriefing on Monday evening, Mar 24th at at the club.

The people at the Fire Department said were really impressed with the complexity of the drill and thought the CSC did an excellent job with it. This drill in particular represents the start of a really positive relationship with the rescue services and in particular the local fire departments. 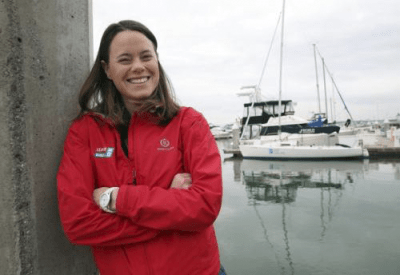 While we wait for our Commodore Stephanie Evans to send her report from China, let's enjoy reading about her on Oakland Tribune.

Evans, 29, of Oakland, will honor him by competing in the 10th leg of the Clipper Round the World yacht race from Qingdao, China, to San Francisco on March 16 aboard the 70-foot cutter sloop GREAT Britain. She received a free trip after being selected to crew during a competition last summer.

We'll all be waiting for her updates on this blog and follow Great Britain on the race map.