I posted while ago on launching in low tides. The idea was close attention to sail trim. The common mistake is to over-sheet the main leaving the dock, and even with full centerboard you'll drift sideways into the Cal Adventures dock.

Here I want to talk about docking in low tide.

There are several problems. One is recognizing that it's low tide. It's easy going out with a "fresh" boat (you push the centerboard/rudder down and feel the mud, so you bring it up a few inches). But coming back you have to recognize and plan it. My rule of thumb for Bahias is that a tide of under +2.0 means you have to raise the centerboard and/or rudder. Plan for it, and raise both on the way in. When it's all the way down, the centerboard is about a foot lower than the rudder fully down, so you can adjust the two differently.  In very low tides, the rudder will be just below the water, horizontal. It will work, but it will be very  hard to use, and hard to turn quickly. Also, the stress on the rudder when it's parallel to the water surface is in a direction it's not designed for. So it's best to limit the amount of time you sail with the rudder in that position.

You will find that the boat handles differently with the centerboard up (or raised above the normal, fully down position). An important thing in docking is that the pivot point of the boat is farther aft, which means that where the boat actually turns in the water will also be farther aft.

The dock approach will be different in low tides. You can't use the standard "come in on a beam reach and slow sail to the dock". Your leeway with the centerboard up will be too much. Even if you aim for the south end of the dock, you'll be lucky not to hit the sea-wall (painful personal lesson here).

You can simulate this by docking in normal tides with the centerboard up (I recommend this exercise). I did this a few weeks ago, and discovered that the best approach is to go as far upwind as you can, then sail downwind aiming at the south end of the dock, and doing a quick U-turn into the dock a boat-length or so away from it (the specifics will depend on the wind, but here's a diagram). 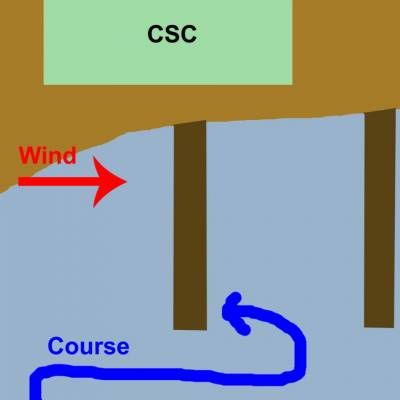 The idea is to turn into the wind to stop the boat and (if necessary) to quickly turn up or down the dock to further bleed off speed (you have to make the right choice here, right in a northerly wind, left in a southerly wind - left is better if you're uncertain).  Carry more speed than you think necessary. You can bleed off excess speed with the quick turn at the end, but if you can't make the dock, you're toast - hop off into the mud.

Another lesson here.  What to do it you miss it completely. You get within a couple of feet of the dock, but can't get closer. You try to accelerate (as you would in slow sailing), but you don't get closer to the dock but closer to the seawall.  Unless you're really good, you won't be able to tack without a centerboard a low speed. So gybe away, get out of the dock area, get the centerboard down, head way upwind, and try it again.  Missed approach, as pilots say. No big deal.

The specifics of this depend on the wind direction. I was assuming a westerly wind. With a southerly wind, you'd apply the same principles but execute it differently. Come into the dock on a run (or a broad reach on port tack, within a boat-length of the dock. Your U-turn will point you parallel to the dock. With a northerly wind, you want to get as high as you can either east or west of the dock. Come in as close to the end of the dock as you can on a beam reach, and then turn upwind. Try not to run over any windsurfers, who use the end of the dock as a launch/landing pad.

Pictures from the Regional Rescue Drill

The Art of Stepping Off

Rudderless But Not Adrift: Sailing Without Your Rudder