Docking our keelboats under sail is one of the most difficult skills required for the Senior Rating.  This series of blogs is intended to give you a conceptual framework for doing it. With that framework and a lot of practice, you'll acquire this important skill.

For simplicity, we're talking about a "normal" upwind docking into a CSC slip, where the true wind is out of the West or South-West, but not too far South.

Here is a map of the Marina with the standard docking approach:

And here's the blow-up of the turning basin and our docks, assuming a normal West or South-West wind: 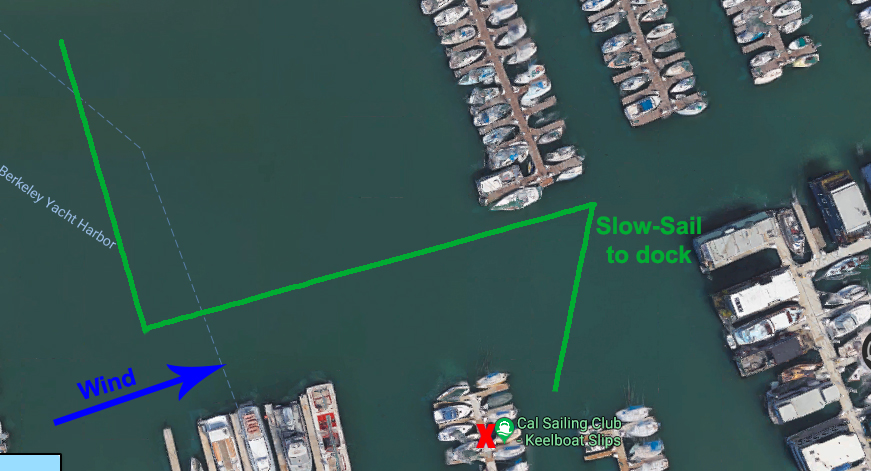 Important Note: I will be showing some sample course lines in the blog to illustrate the main points. These particular course lines are for a very specific wind condition, which is indicated in the diagrams. It is a big mistake to think of your docking course lines in terms of geography (e.g., turn up as you pass the stern of the Red Boat). These course lines will change with the wind, and you should always be thinking in terms of the wind.

Having a Plan B and a Bail-Out Point

You have a plan for the docking, but it might not work for a number of reasons. The wind could change in a way that makes it impossible, for example. It's not unusual for the wind to move around quite a bit at our dock, say between West and South. The plan could just be wrong, and you don't realize it until you get close. Crew or equipment problems could prevent you from executing it. Another boat might appear at the last minute and get in your way. All of this and more.

Note that the wind around J Dock can be quite different from that in the fairway. It might be solid West in the fairway, but shifted around to the South West on your final approach. In this case, your carefully planned approach would be head to wind. Also the wind speed can vary considerably. It may be almost non-existent at J Jock or it can gust suddenly just as you near the slip. You need to think about how you will handle each of these situations.

So you need to plan how you are going to get out of there safely if you can't dock. You can't plan for every possible circumstance, of course, and you may have to improvise at the last minute, but you should have a way out that will work almost all of the time. And if you're thinking about a bail-out, your head will be in a good state to improvise even if that bail-out isn't possible. One very good skipper told me to have a Plan B and a Plan C ready.

You also need a decision point, an exact place where you will decide either that you can make the dock for certain or that you will bail out. When you reach this point, if you aren't certain that you can make it, you bail out (I'm saying this again somewhat differently to emphasize the point). You also have to be able to execute your Plan B, which among other things means having enough boat speed at the bail-out point to maneuver. If you've just squeaked out a docking, you shouldn't feel good about it. If the wind conditions had changed at the last minute, you might not have made it.

Boat Speed - Slow is Dead in the Marina

If you're too slow, you lose steerage and get pushed sideways. Maintaining steerage on a Commander is especially critical, as the long keel can take a long time (7 or more seconds) to power up after you've lost steerage, and you're pushed sideways during this time. Other than on final approach to docking, keeping the jib tell-tales streaming is your best indicator. When you're slow-sailing, you need enough practice to see and feel whether the boat is going fast enough. You should be ranging as you approach the dock to see if you're being pushed sideways, a clear sign of losing steerage. I'll discuss the details of ranging in the next blog.

It's better to carry more boatspeed than you think you need when docking, as you can slow the boat down and stop it fairly easily in the slip as long as you're not super-hot. It's much harder to recover if you end up short of the dock without enough speed. And you need enough boatspeed to do your Plan B at the bail-out point.

In our standard scenario with the wind out of the West or South-West, the best Plan B is to tack away into the turning basin. You're going out into a wide area, so you have lots of options after you get out. Your bail-out point should be far enough away from the slip so that you have room to tack, and of course you need enough speed to do it. A long final approach gives you the space and time to make the decision and if necessary execute the Bail-Out. 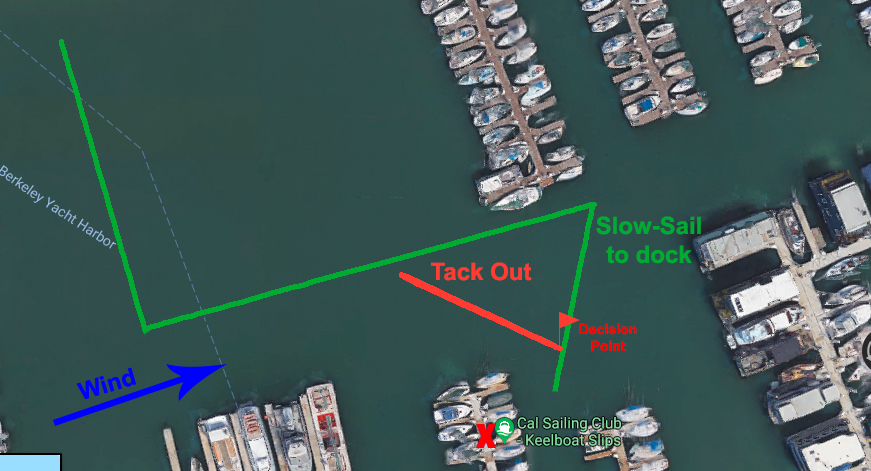 If you are too slow to tack, you could turn as high as you can into the wind and back the jib to port to pull you through the tack (assuming you haven't dropped the jib). You will then have to power the boat up as quickly as you can to get upwind and out of there. Remember the importance of sail trim when you do this, and don't oversheet the main. It's good to practice doing this in the turning basin, where you have a lot of room to experiment and nothing to hit.

Another option is going down into the J Dock fairway and docking into an empty slip. Get into the habit of noting where the empty slips are as you walk down J-Dock (currently, there are quite a few). Here is another good training exercise. Start a normal docking, but then bail out into the fairway just as you get to your target dock, and then dock the boat in an empty slip farther down. Do it first on the Merrit and then on the Commander. You'll find it's quite easy with the Merritt but not all that difficult with the Commander. But see below for how to practice this safely in steps. Having done this in practice sessions, it will be less intimidating and much easier in real life when it's an unexpected necessity.

The worst option is to turn downwind and gybe out. You're in close quarters with lots of things for a swinging boom to hit.

Another Thought about Wind

I've mentioned how different the wind at J Dock can be from that in the main fairway (and certainly quite different from out in the Circle). Think about that when you come home reefed. You might want to shake that reef out before you dock to make sure you have enough power in the lighter wind. Some days you will even want to use the jib on final approach.

When you're in a situation where you have to improvise a quick bail-out, it helps if you've practiced various options for doing so. You can start in open water (the turning basin) to get a feel for how the boat handles and what its limits are, and each type of boat is different. Then do it at the dock with enough experienced crew to cover possible problems. Do it enough times that you're comfortable with it and can nail it. It's not practice that makes perfect, but perfect practice that does so.

These blogs are attempting to help you get a mental image of what you need to do in various docking circumstances. Having this will help you practice, and lots of practice is critical, even more so after you get your Senior rating.

I'll talk about ranging, a very important technique, especially in the Marina.