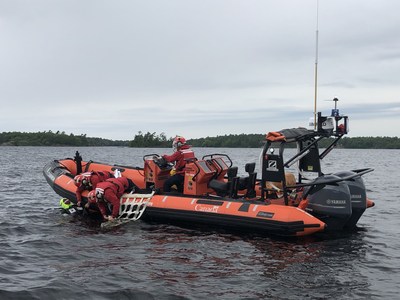 On the way back into the Berkeley marina on a Sunday afternoon, we heard a panicked 'mayday, mayday, I'm in the water just off the Berkeley pier'.

I had been watching a Santana 22 near the gap luffing it's main and bobbing around and was wondering what they were doing, so we knew about where the person must be.  There were 3 other sailboats nearby that must have had the same thought.  Everyone got their sails down and motors started ASAP and headed over to the boat.  We didn't see the person so we all went different directions in search.  The Coast Guard started talking to a couple of the boats about search efforts.
I'll give my timeline of events as we saw them.
It took about 15 minutes for the first CG boat to show up.  Another 15 for the helicopter.
In the meantime, one of the other sailboats went over to the adrift Santana, which was slowly sailing itself away from the pier (thankfully).  Someone hopped on and they started heading to the marina.
We kept running sweeps until the helicopter showed up and started circling.  Figuring they were going to see a person long before we could, we headed in, in very poor spirits.  After 30 minutes of not hearing the guy on the radio, and CG still searching, we were pretty sure we'd just heard someone's last words over the radio.  I thought 'I hope this isn't yet another story we hear too much that ends with "if they'd just been wearing a PFD...."'.
We'd been anchored out for the weekend, so we made a stop at the pump-out dock on the way in, and saw that the adrift boat had been brought there and tied up by it's rescuer, so we talked to the people that brought it in.  In a pleasant turn of news, apparently one of the other sailboat's found the guy early on and got him out of the water, but never radioed on 16.  So all of us, including Coast Guard, were out there searching for quite a while before anyone knew.  Later, the CG pulled up to us near the rescued boat and asked us to throw some of the gentleman's things inside, who had been taken to the hospital for hypothermia, but was otherwise fine.  I was glad to see one of the items was an auto-inflated PFD with radio attached.
Things I learned from the experience:
1)  Coast Guard response time is not always as fast as you would want it to be, especially if you're the one in the water.  Thankfully there were multiple boats right there.
2)  PFD and radio are crucial.  If he hadn't been able to call that mayday, even though there were boats nearby, who knows if anyone would have happened to notice him any time soon.
3)  Monitor 16.  The reason he got rescued quickly was because every boat in the area was listening on 16.  It's legally required to monitor, yes, but also you could literally save someone's life.  Think about if you're the one in distress calling a mayday.  I was very proud of the response by the sailors.
4)  I haven't talked to the skipper, so I can't say what happened, but it was the end of the day and everyone was coming in, pulling down sails.  The jib was down on the foredeck and main still up, so it's likely he was out of the cockpit prepping to come into the marina, and fell off.  Remember the rule, one hand for yourself, one for the boat.  Always have a hold of something, especially when you're by yourself.
Thankfully he did the big things right.  He had a PFD with a radio attached, which no doubt saved his life.  In sailing, things go wrong FAST when they decide to go wrong.  There is no 'oh I'm going to do this thing real quick, I don't need to put a PFD on.'  Which is why at the club we require a PFD at all times, and a radio when out of sight of the dayleader.
Stay safe out there, always.
×
Stay Informed

Don't be afraid of the radio
Tire Bouchon, à plus tard!