There are at least 4 ways of doing this, and all of them have their advocates  (which means that there are advantages and disadvantages of each, and each is optimized for different circumstances).

I think most instructors at the Club teach the Broad Reach (or Deep Beam Reach) procedure.

1. Immediately go to a Broad Reach
2. Sail for a small number of boat lengths (it doesn't matter how many, just get far enough away from the MOB to give you room to maneuver and sail back)
3. Tack around, furl the jib
4. You're on a close reach, slow-sail to the MOB 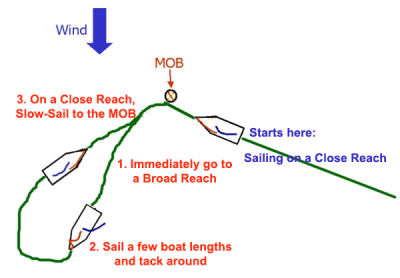 1. A common problem is getting onto a broad reach. Invariably they get onto a beam reach. When they tack around, they're on a beam reach, so they have to correct downwind, and then slow-sail to the MOB. Some can read the situation and make the corrections, but most can't. But getting on specific points of sail is something you have to learn, and this is an exmaple of why.

1. In the South Basin with Dinghy's, this is an excellent approach. You're not at risk of losing the MOB in the chop, so you can safely get a good distance from the MOB.
2. It's key to get the student to recognize when they are on a broad reach. This is the most common error. If they don't feel the wind direction, they should note that this is when it all gets quiet, as they're starting to go downwind (and the boatspeed wind is starting to cancel the true wind). If the wind and seas are up, they should see the boat angle relative to the waves (which is approximately that relative to the wind).
3. They've got the sheets out all the way on the broad reach, so when they tack around, they should pull hard on the falls to get the main way in. This will turn the boat tighter into the wind (an example of the how rudderless sailing technicques are useful in normal sailing).
4. Furl the jib. You could do it before the tack, but in some conditions you'll need it for the tack.
5. When they're tacked and pointed at the MOB, check the point of sail. With the mainsheet out, it should be luffing strong. And you should be able to power up by pulling in the falls.
6. If both of these happens, Bob's your uncle. Slow sail to the MOB. If it doesn't, adjust. If you  get no luff pointing at the MOB, fall off until you can point at the MOB and get a luff. If the MOB is too high, fall off a lot, tack around, and try it again.
7. Play the slow-sail to the MOB. See how much you'll cruise when you let the sheetsout. Use this to determine how far in front of the MOB you'll release the sheets on the final run. If you're not going to make it, you can "goose' your speed; if  you're coming it hot, you can make a very quick turn into the wind around the MOB (not running him over).

Some instructors teach the Figure 8:

1. Immediately go the a Beam Reach.
2. Go some number of boat lengths and tack around
3. Find the point where you can slow-sail to pick up the MOB 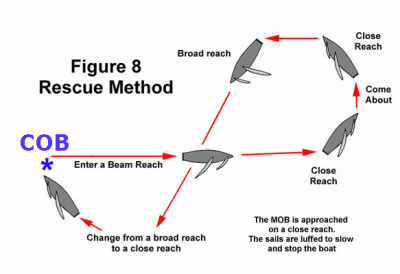 1. It's easy to go to a Beam Reach and tack around.

1. It's more steps, and you have to figure out when to head upwind (but you do that docking, right?)

The other week I played around with the Quick Stop:

1. Go head to wind right away, and leave the jib cleated
2. The jib will back and tack you. Either leave it set or proper it (or furl it, even).
3. You'll drift upwind of the MOB.
4. Turn downwind after you pass the MOB and gybe after you get downwind of the MOB
5. Turn upwind to get to the MOB 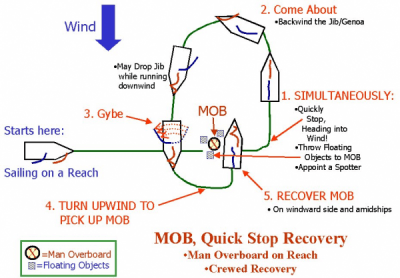 1. You never get very far from the MOB (less of a problem for dinghies in the South Basin)
2. It's very fast

1. Your gybe had better be good, or you have both a capsize and a MOB to deal with

1. I would do this in real life.
2. I would not teach it to someone whose gybe was not really good, but I would to a more advanced student.

In the texbook scenario, you pick the MOB on the windward size (we're talking dighies here). In real life in our dinghies, they're coming in over the transom. So it doesn't matter which side of the boat the MOB is when you get there.

This is my experience. What's the collective experience/wisdom here? I know it's different in keelboats. In a big boat where getting far from the MOB means possibly losing contact, the Quick Stop is a clear win (I think). And in investigating this, I've found several other procedures that I haven't mentioned. I'm looking forward to a discussion on how we teach dinghy students.