Planning a cruise around Alameda, and an old navigation technique

This is about how to plan a particular cruse, circumnavigating Alameda Island. I'm doing it for two reasons. One is to document the specifics for other cruising skippers who might want to do it. The other is to give members an idea of what's involved in planning a cruise.

Circumnavigating Alameda Island is a wonderful experience. I've done it in a kayak and later in a sailboat on a CSC cruise. Part of the wonder is the diversity of it. You have Jack London Square, the Port of Oakland, the closed Naval Air Station, the aircraft carrier Hornet, an incredible beach facing San Francisco, a marsh with a lot of birds at the south end, and some post-industrial stuff along the estuary. The estuary is much improved since the time I kayaked it. The run-down houseboats are gone, and some of the bleck on land has been replaced with parks.

There is also the Coast Guard Island in the middle of the estuary, and if you're lucky the 418 foot ocean patrolling cutters are in. They go out for 90 days in the Pacific.

And then the drawbridges, 5 or 6 depending on how you count. The website is here. 5 of them are very active, and one is a bicycle/pedestrian bridge, right next to a car bridge that goes from Alameda to Bay Farm Island, and it's is the longest drawbridge in Alameda County. It's an incredible experience seeing them open just for you, a little sailboat.

The question in planning this is which direction, clockwise or counter-clockwise. There are a couple of factors to consider. One is that all of the drawbridges are staffed into the evening except for the Bay Farm Island bridge, which has limited hours (usually until 5:30 PM). Also, the bridges will not open during peak commuter hours.

This is a cruise where the tide is very important because the south part of Alameda is a swamp with a very narrow channel: 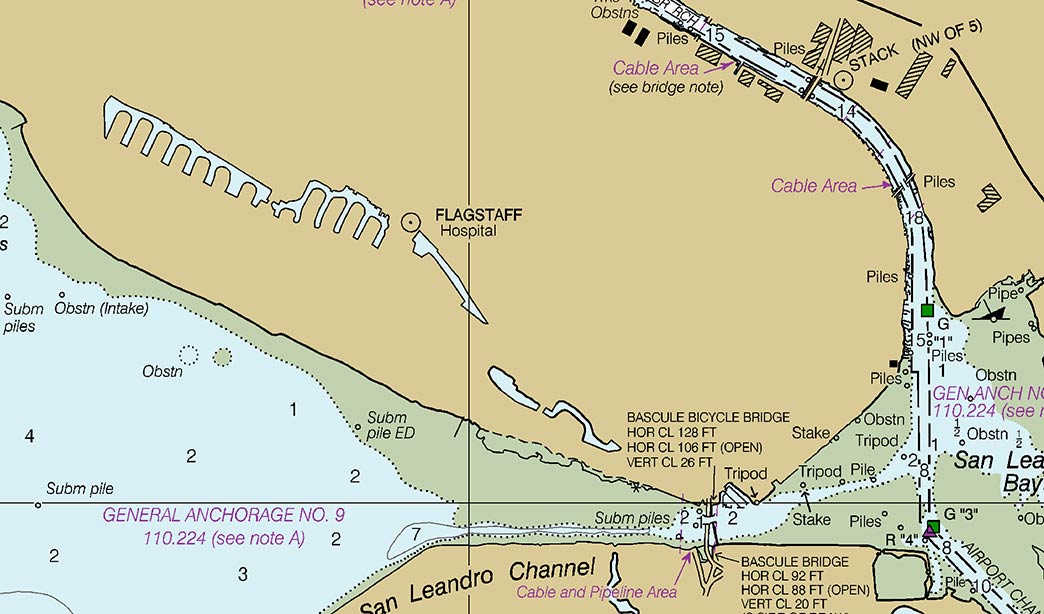 Note that there are no navigational aids charted for this channel. There actually are some, but they are improvised, including at one point a PVC tube sticking out of the mud. And note the green area on the chart where you absolutely should not go.

If you do the cruise clock-wise, this part will be easier. You'll navigate through the narrow channel fairly easily, and then stay close to the San Leandro shore until you are a good way out. Then you're good to go into the bay.

If you do it counter-clock-wise, plan it to enter on a high tide to give yourself some margin. You have to be very careful to clear the green area entering the channel. I think the best way to do this is with a Danger Bearing on the Oakland Airport control tower. This is an old technique, pre-GPS, which works well if you have a prominent object in the right spot. You use bearings to that object to tell whether you are where you should be. Here it is for the channel at the south end of Alameda: 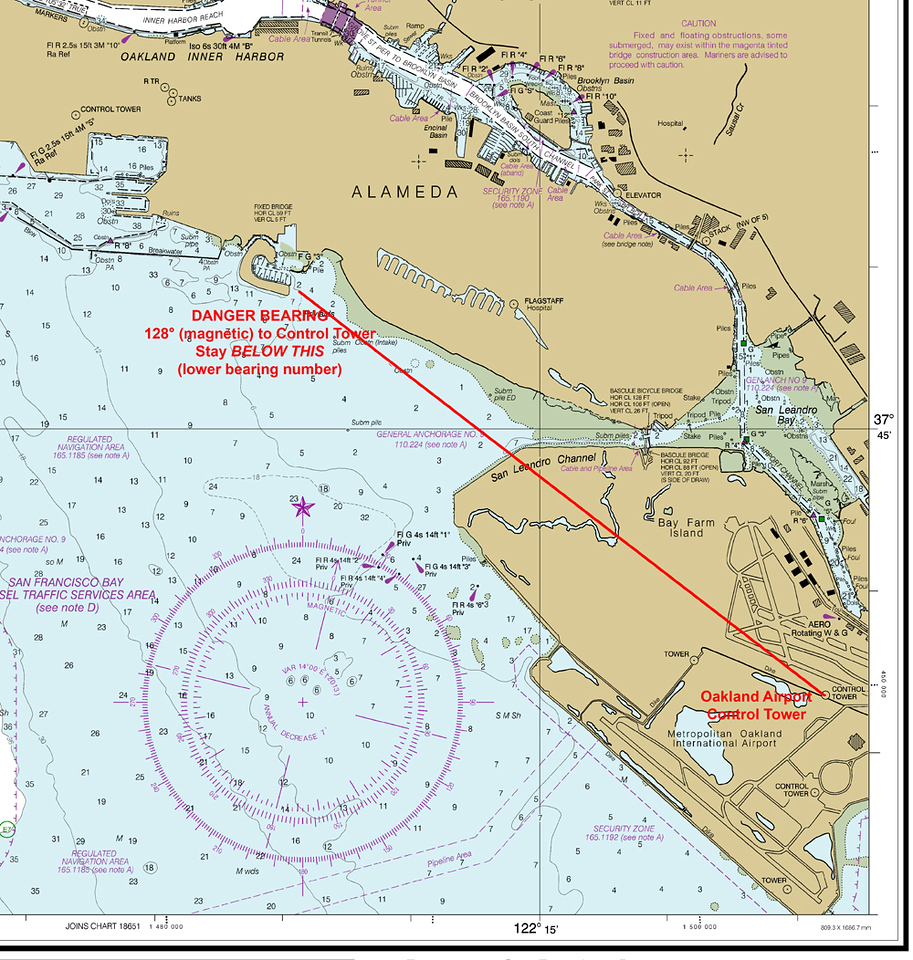 As you're coming in, take bearings to the tower and make sure your bearing is always less than 128 degrees until you get almost to the San Leandro shore. When you get there, you should see some of the improvised markers. You can, of course, just watch your track on your maritime GPS, but I find the Danger Bearing technique easier.

Another factor in selecting direction is that the prevailing wind blows almost straight down the estuary, which is not very wide at sections, which means that you'll do a lot of tacking on a counter-clockwise cruise. We did 60 tacks on mine: 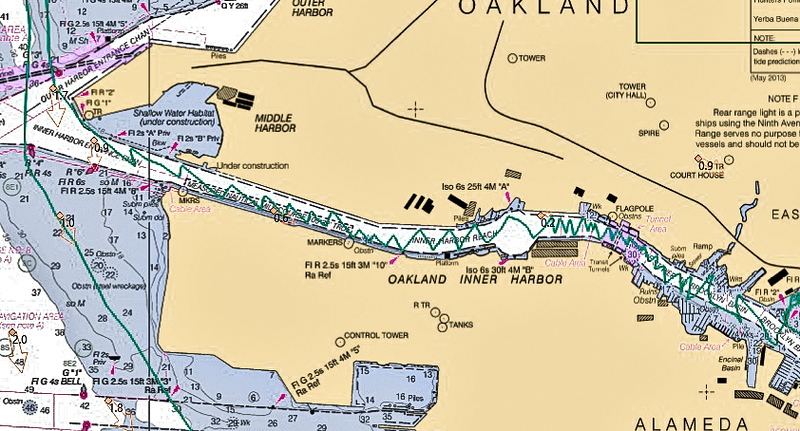 This is a good challenge. You'll need to point as high as you can, so make sure the jib is in as much as possible. Also pay attention to wind shifts. On my cruise, the wind shifted adversely near both banks of the estuary. If you follow the wind, you will lose progress up the estuary, so it's best to tack when you hit the shift. It will seem like more work, but you will make better progress. If you don't want this challenge, do the cruise clock-wise.

You should motor through the drawbridges and the channel at the south end, as you might have to wait for a bridge to open, and there is very little maneuvering room in some places. As you approach the first drawbridge, call them on Channel 9. (Call sign will be "Park Street Bridge" or "Bay Farm Bridge"), Tell them who you are and where you are (e.g., "approaching from the north"), request an opening, and tell them that you will be going through all 4 bridges. They will pass your request on to the other bridges, so you will not need to call them – they will open when you get close.

There are several places to stop for food. On a Sunday, there's a Farmers Market in Jack London Square with food truck options, and there are also restaurants there. There are two public docks there: 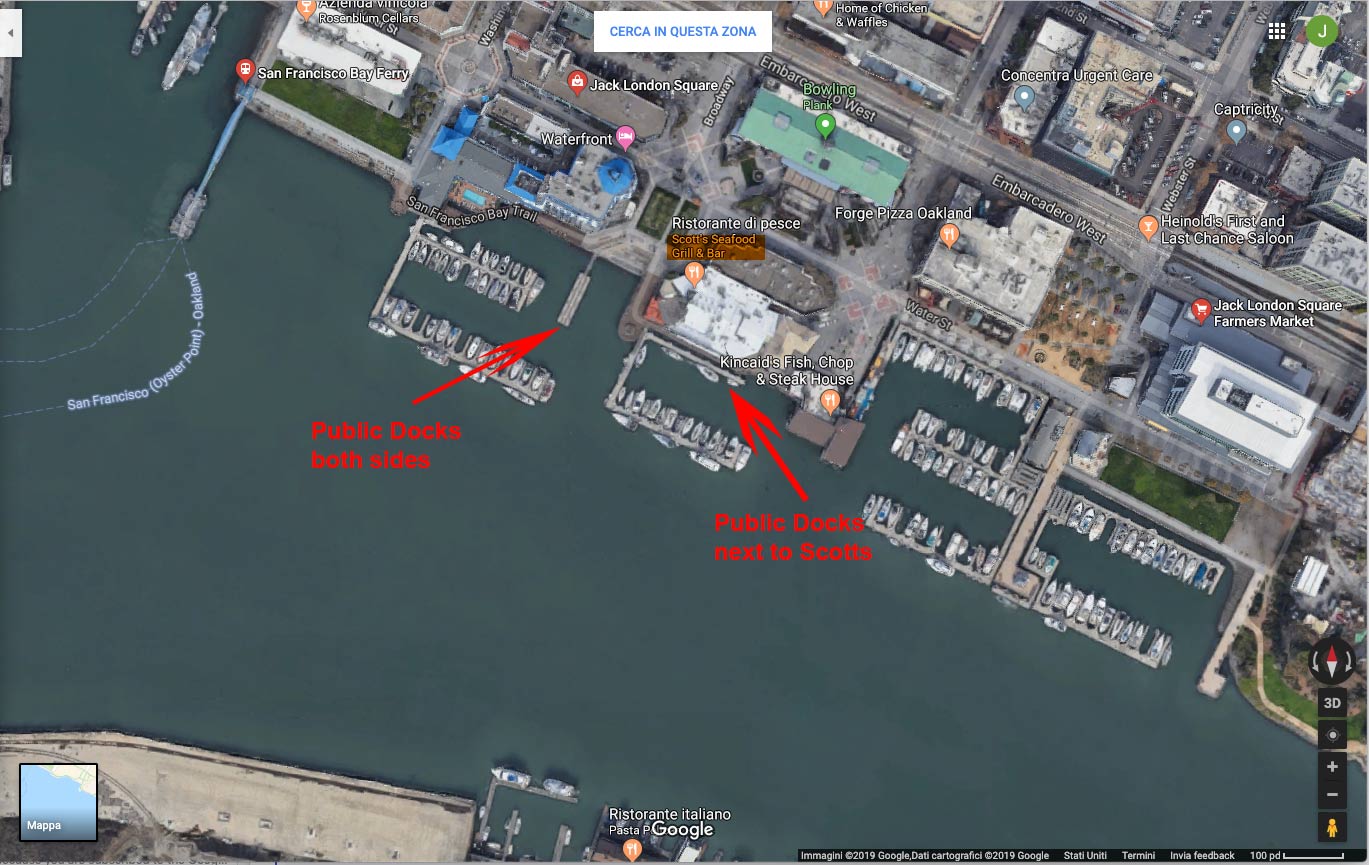 There are two other restaurants past Jack London Square (to the south) which have public docks, Brotzeit and Quinn's Lighthouse.

It's a great cruise.

Thank you John for sharing your knowledge & wisdom. This article seems, to this novice, to be an enticing resource.
Blessings, Billie

Thank you John for sharing your knowledge & wisdom. This article seems, to this novice, to be an enticing resource. Blessings, Billie
Cancel Update Comment
1