Unaware of what was about to transpire, the young woman on the bouncing bow clung grimly to the flailing pulpit, searching the horizon for a glimmer of hope. The young man knelt on the pitching foredeck behind her, fishing desperately into his bespoke West Marine foulies pockets for the unique object he believed would end the nightmare of uncertainty. Farther back, in the luxuriously appointed cockpit, the skipper and crew -- all ruggedly handsome -- fought to keep the Pierson Commander from broaching as the famed Emeryville abrolhos wind smacked the vessel, threatening to crush it into an equivariant toric bundle like you see in Macaulay 2. The man on the bow stumbled, lost his balance, and, crying out in what may have been Old Extremely Panicked German, tipped with his secret cargo toward the dark, beckoning waters off the port gunwale, unprotected by any Loos and Company lifelines, with nary a Harken chafe protector in sight.

This was the nightmare scenario. As it turned out, on a recent Monday, Anthony Lunnis, Paco Bellam, and I picked up CSC Senior Skipper Nathan Ilten and his guest Robyn Gee at San Francisco's Pier 1.5 and headed back to Berkeley without incident or wind, silencing the motor as we slipped past the Bay Bridge on a glassy sea as he proposed and she accepted on the foredeck of Portugal Princess. 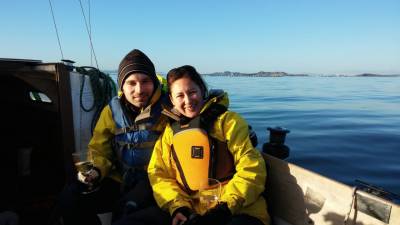 May it be a long and happy one!

May it be a long and happy one!
Cancel Update Comment
1