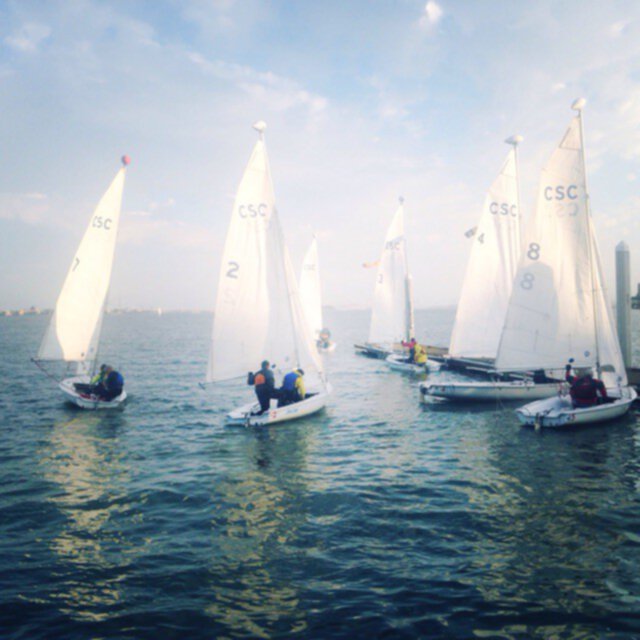 There are a couple ways to come into the dock. The method new skippers gravitate towards at first, because it's easier, is to come in with plenty of speed and do a final turn up into the wind at the end to avoid banging into the dock. Or they don't even do the turn and just bang into the dock... I guess this would be a 3rd way, but highly undesirable.

The preferred method more properly utilizes slow sailing. Docking and COB are the main reasons we teach slow sailing. When you have a firm grasp on slow sailing, you will be able to come to a stop 1" from the dock as your crew casually steps off the bow.

Here are the steps for docking like a pro:
(Credit where credit is due, I've had this best explained to me by Robert O. Come work the keelboat dock during open house sometime and watch Robert dock a keelboat singlehanded to get an idea of the ideal you're shooting for.)

- When you're coming in to the docks watch the wind socks to get an idea of the wind direction at the dock, which may be different than it was when you were out sailing.

- Pick an exact spot on the dock. This is where you're going to try to end up. You don't have to tell anyone else the exact spot. If you don't hit it exactly, and are a foot off, no one else will be the wiser, it will still just look like a really good docking to them.

- Come in way downwind, right next to the second dock. You want to give yourself plenty of room to bleed off speed.  At this point the mainsheet should be all the way out, and you are controlling it with the falls, which is quick and doesn’t risk a jam.

- Turn up hard onto what you think your slow sailing course will be with the mainsheet all the way out. You want to aim for a Close Reach course, which is about 60º to the true wind.  This is practically the only time you use the true wind instead of the apparent wind when sailing.  The quick/hard turn is important and does two things: 1) It bleeds off some speed, and 2) it immediately lets you know if your angle is right, so if it's not you have plenty of room to adjust. 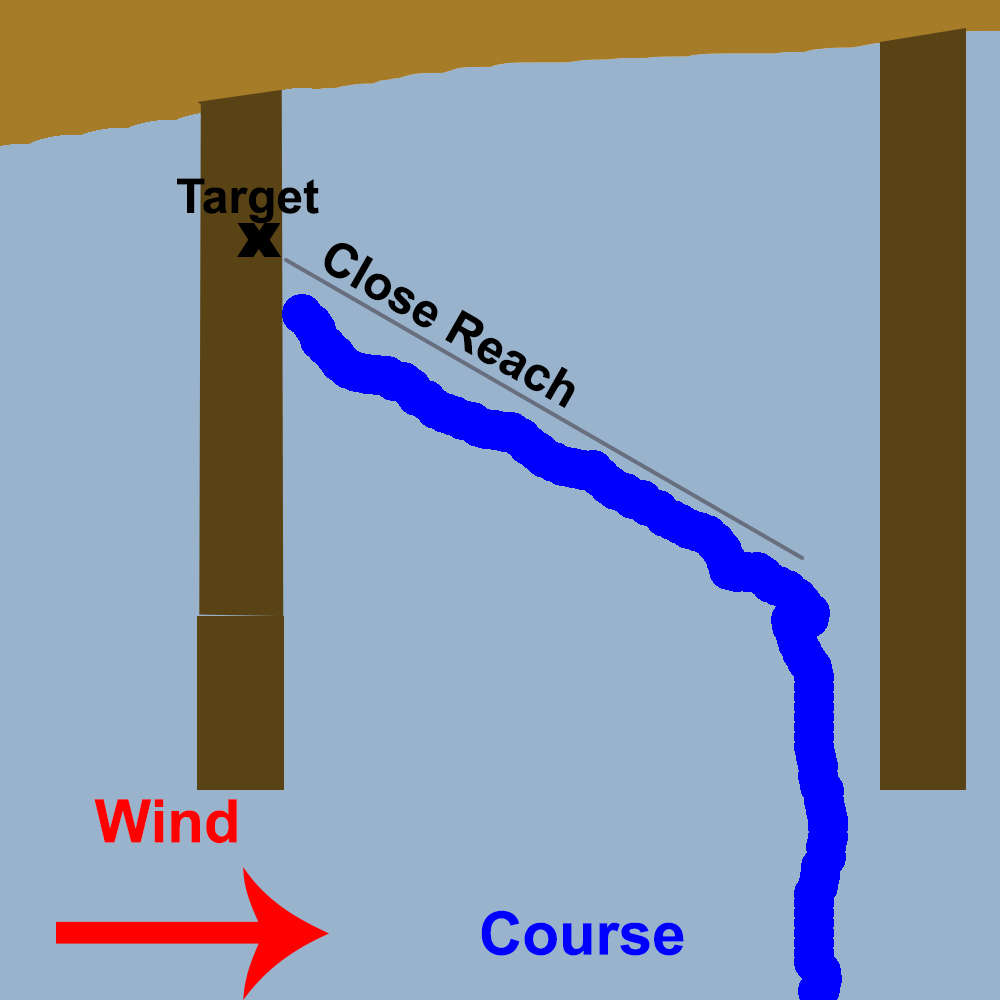 - De-power (let the main out). The dinghies coast further than you would think, and you don't need full speed between the docks, so bleed some speed early.

- As you get closer, let your speed come down more and more. Towards the end you want to be doing quick, light pulls on the falls to get just a tiny bit of speed as needed. However, until you get to the dock, don’t let your speed get to zero. If it does, there’s no water flowing over the centerboard, and the next time you power up you’ll be pushed sideways before you start moving forward.

- As you get to the last couple feet from the dock you should barely be moving, and the boat will come to a gradual stop with hopefully the lightest of taps on the dock.

We'll never get it perfect every time, and you still have the turn-up option at the end to bleed off speed. Or even better, if you realize you're coming in too hot, is to step forward and backwind the main, which will stop the boat quickly and can still be used when coming into a crowded dock and squeezing between two boats, where you don't have room to turn.

By shooting for the perfect docking every time, even when you don't quite get it, your dockings will start to make you look like a pro (in the area that everyone is watching you, too!), and you'll get a better control over slow sailing, which comes in very handy in other ways.

One final note:  This does not work in tides so low that you have no centerboard. But that’s a different blog entry.