Last time, we looked at apparent wind and how it changes as you change point of sail. In that discussion, the speed and direction of the true wind was the same and the boat direction changed. Here we look at what happens when you're keeping the boat course the same, the wind direction doesn't change, but the wind speed does. It increases (a puff) or it decreases (a lull). You get both of these as you're traversing the Novice Area on a normal day (westerly winds), as the trees and gaps between them on the breakwater to the restaurant cause this uneven wind.

Again, we're using our Bahia-like dinghy and a 5 kt. wind. You're sailing close-hauled, so it looks like this: 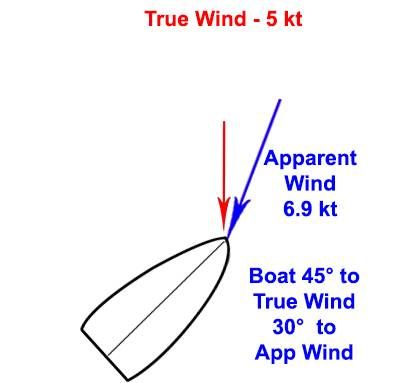 The boat is 45 degrees to the true wind, but only 30 degrees to the apparent wind. Normal. Then you get a puff, say a pretty big one (10 knots, double the speed but out of the same direction). In that instant, your boat speed doesn't change (it needs time to do that), but your apparent wind does. It looks like this: 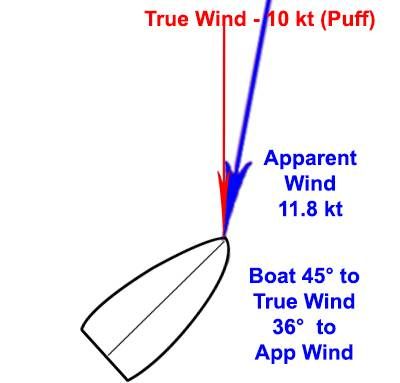 Notice a couple of things. Of course, the apparent wind increases. But it also changes direction - it moves aft. So instead of being nicely trimmed for close hauled, you are stalled (over-trimmed) on a close reach. Look at this animation (click on it to see it):

The apparent wind has shifted about 6 degrees aft, enough to screw up your sail trim. It's as though you steered 6 degrees downwind and didn't change the sails. What do you do? You have two choices - let the sails out to trim to the new point of sail, or sail higher into the wind. If you're trying to go as high as you can into the wind, you would do the latter (and be ready to bear off again after the puff subsides). And there's more going on, as you will also get a stronger heeling force from the puff and the un-trimmed sail angle, which heading upwind or easing the sails will reduce.

How about a lull? Again a pretty big one, going from 5 kt. to 2 kt. Again, your boat speed will not change right away (it needs time to slow down), but your apparent wind does. Remember this is where we are close hauled and correctly trimmed:

And we get a big lull: 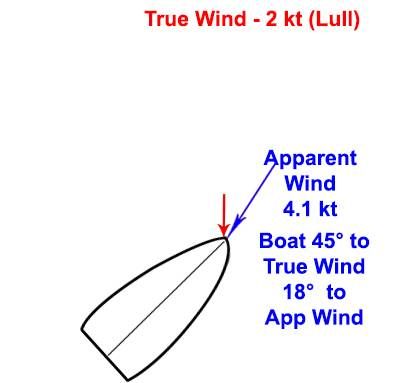 The apparent wind decreases, as you would expect. And it changes direction - this time it moves forward. So instead of nicely trimmed for close hauled, you are headed, too far into the wind. Here's the animation (click on it to see it):

The apparent wind has shifted 12 degrees forward, and your sails just aren't working. It's as though you steered 12 degrees into the wind, and you know what that would do. It's happening here - both sails luffing. Two choices here, also. You can't trim the sails any tighter (as they're already as tight as possible). You can bear off to get the boat close hauled for the new apparent wind. Or you can tack (if you're quick, you can do it before you lose boat speed, otherwise, you'll have to bear off to get some speed, then tack). Again, be ready for when the lull goes away.

Puffs and lulls are part of everyday life on the bay, particularly (but not only) in the Novice Area. If you understand how they affect apparent wind, you'll be prepared to deal with them easily.