The last in the series - Apparent Wind downwind.

It's hard to steer downwind. The waves toss the boat around more, and if you get tossed too much, you'll gybe when you don't want to. You can capsize on a broad reach in heavy winds and seas.

We'll use the same 5 kt. true wind we've used before and the same Bahia-like boat. You're almost dead downwind - just 5 degrees short of it. Here's what it looks like:

Now something changes by 10 degrees in the downwind direction. You might change course by 10 degrees farther downwind, the wind might shift 10 degrees clockwise, or the waves might push the boat 10 degrees downwind. Now you're here, which is the mirror image of the above: 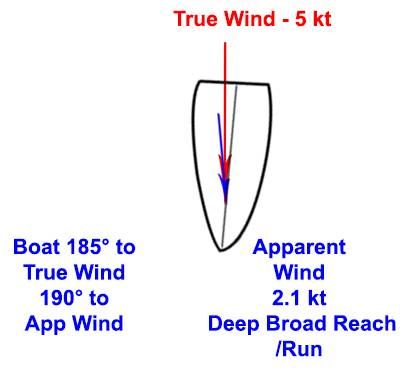 Here it is in animation:

This sensitivity of apparent wind to small changes on a downwind course is one of the reasons steering downwind is so challenging. Steven Colgate discusses this in his book Colgate's Basic Sailing Theory, the reference book for the Senior written exam.

This can help you in timing your gybe, if you have the option to time it. Do it when you accelerate down a wave. The apparent wind diminishes, and so does the force on your rig. It's a gybe in a lesser wind, so it's easier and  gentler.

This concludes the Apparent Wind blogs. I hope they've been useful.