A very common problem my students have voiced is that they have trouble figuring out where the wind's coming from. On the one hand, it shouldn't be so hard - turn your head and feel the wind on your ears. When it's the same on both ears, you're either looking straight into the wind or straight away from it. Or (less accurate) look at the yarn on the side stay.

Yet it's not so simple. You think of the wind as coming from the same direction, but when you sail, it doesn't seem to do that. It seems to shift a lot. And "you told me we couldn't sail higher than about 45 degrees into the wind, but that yarn on the stay has a much smaller angle than that". And (yet more observent) "We're sideways to the waves, so we should be on a beam reach, but the yarn says we're still somewhat upwind".

Welcome to the world of apparent wind. This is a simple concept to explain and  understand at a high level, but very hard to get at a detailed level. Everyone gets the simple explanation - you're peddling a bike at 10 knots on a calm day, what do you feel? A 10 knot headwind. The speed you're generating adds to the wind speed to create the wind you feel, the apparent wind. The apparent wind is what you and the bike feel. Peddaling 10 knots in a 10 knot headwind, and you're pumping against a 20 knot apparent wind. Doing the same in a 10 knot tail wind, and Bob's very much your uncle.

Those with a math background easily grasp that this is a vector algebra problem - the boat wind speed adds up with the true wind speed as vectors, where both the speeds and the directions interact. But even if you get that, it's truly hard to see how it all plays out on the water. And I'm speaking as someone with a graduate education in mathematics. In editing this blog, I realized that I had messed up a calculation in my first draft. If you sit down to do the calculations, you have to determine what your boat speed will be at a given true wind speed and point of sail (angle of the boat to the wind). Polar performance diagrams will show this, but good luck finding these for any of our dinghy's.

So my point is that it's quite difficult to build a mental model of this. Instead, you can get a feel of how it happens on the water without trying to understand why, exactly. I did the math from a guess of a polar diagram for a boat similar to a Laser Bahia at 5 knots wind. If you're not racing, it doesn't matter how accurate this is. But it should be pretty typical.

I'll work through some examples at various points of sail. Here's what it looks like close hauled: 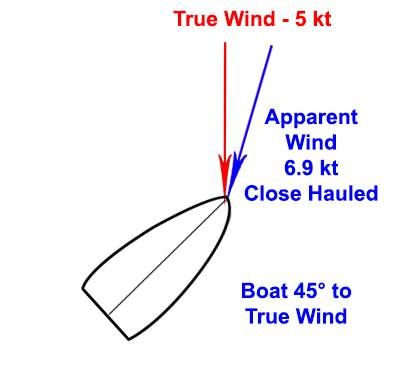 You're sailing 45 degrees to the true wind, but you're sailing about 30 degrees to the apparent wind. Look at the yarn on the side stay, and you'll see that angle. Remember it, as it's one guide to show you that you're going as high as you can into the wind (a better guide is the jib tell-tales when the jib is sheeted in hard, but unless you're sitting forward in the boat, you may not be able to see them - in that case, a good crew can really help).  It feels really fast, as your boat speed is pretty much addingdirectly  to the true wind speed to produce apparent wind speed. If you're trimmed correctly, your main sail is sheeted in hard, so the lift force from the sail (perpendicular to the sail) is more or less sideways to the boat, causing a fair amount of heeling force, which you have to balance with your weight. 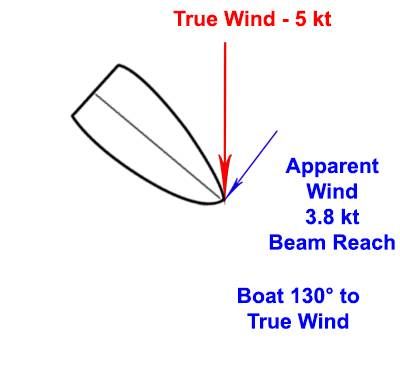 Beam reach is when the apparent wind is 90-degrees (sideways) to the boat. Because of the way boat speed and true wind interact, you've got to go downwind 130 degrees to the true wind (40 degrees past perpendicular) to get to a beam reach. Beam reach is the fastest (non-planing) point of sail. The sail is still working like a wing (more power than the downwind parachute mode), but the properly trimmed sails are out farther, so the lift force (always perpendicular to the sail) is more aligned with the direction the boat is going. More propulsion, less heel. It doesn't feel as fast as going close-hauled, as the apparent wind speed is less. But the boat speed is faster. 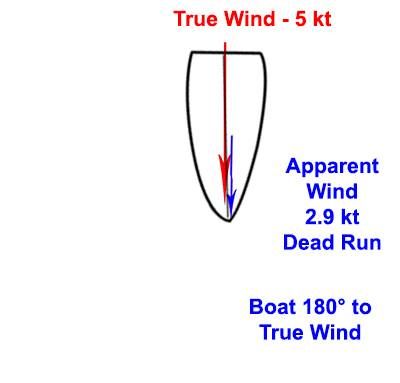 Here's an animation that puts all of this together (click on it to see it):

How much does any of this matter? If you're an experienced sailor, you just know it. You're tuned to the apparent wind, and you're setting your boat for that. So when you fly the kite, the apparent wind moves way forward, and you deal with that. But if you're just learning sailing, it does matter, as it explains the confusing things you're seeing on the water. It gives you a visual model of sail trim.

How to Trap Single-Handed (video)

Tips for skippering with crew on the wire