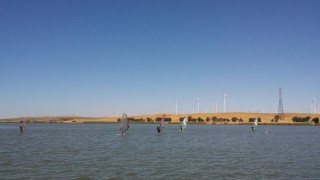 I'd visited the Delta 3 times previously - all for the ABK windsurfing camp; on the last two occcasions I had organized the trip - and I can tell you, trying to get more than a few windsurfers in one place at the same time with a cohesive set of gear is a challenge.  Being a sucker for punishment, and never having sailed Sherman Island outside of ABK, I organized a club trip back in September for end of summer.  This is a recap.

In the run up, I'd had interest from over 20 indivuduals.  There's usually a lot of attrition and these events, and worse, as the day drew near, the forecast was for sun, but little wind.  At the final count, we ended up with 8 - Myself, Wayne, Dora, Ceci, Christina, Zach, Jamie and Will joining us in the afternoon.   We met at the club bright and early, and loaded up with more gear than we thought we'd possibly need.  As it turned out later, we did need it.

We set off for the hour or so drive.  Even with GPS, where to go isn't completely obvious - after crossing the bidge in Antioch, you drive for about 2 miles, then turn off along a narrow road along a river embankment for a further few miles.  At the end are some new (this year) confusing one way systems and lots dirt due to ongoing construction.  The park itself is at the end, and is $5 to go into the parking area by the "playpen", which is the nominal novice area.   Only Christina and Jamie managed to get slightly lost, but not for long.

As we rigged up, the extra gear we'd broght came into use.  Ceci's sail had no pulley - oops!  Winching the downhaul on Dora's sail, on a non-matching mast, we put the top through the mast sleeve.  Oh man!  And finally, one of the booms was lacking a head.  In the end, everyone ended up with workable gear - at least as much as the wind would allow.

I had hoped to teach some beachstarting - Sherman Island is fantastic for this - but the morning wind barely topped 3-4 knots, so it wasn't really to be.  Despite that, both Christina and Ceci, with some lucky gusts and a little encouragement, did in fact achieve their very first beach start - hooray!

Ceci had graciously offered to prepare both lunch and dinner - also facilitating my vegan requirements - as it turns out, the non-vegan echiladas had been placed too close to a bunch of ants, and had to be picked out!  However, both the enchilads and later, the curry (thankfully non-spicy), despite their simplicity, proved to be a hit with everyone, after some ingeious cooking on the tiny camp stove.

In the afternoon, the wind really died, to perhaps 2-3 knots, and we were reduced to some low-wind practice.  I did venture about half way out in the river to the river marker - not something I'd attempt if there'd been much current (the delta has some quite strong tides), and we were the only sail power on the river; a couple windsurrfing in the morning had gone elsewhere.


Zach showed us some fancy backwinding, and we also saw all kinds of funky things in the river, including both live and dead fish!  Also, strangley, there was an interrmittent "burping" sound, which could not be identified - no doubt a river monster or somesuch.
Apart from the lack of wind, it proved to be a beautiful day.  Unfortunately, a vist that time of the year is always going to be subject to the capriicious wind gods; and although in recent years there has been wind at the end of September, it was not to be.

No matter.  We'll be back.  I'm already planning a trip for Spring.   The ABK California schdule for 2017 has yet to be decided, but that will likely happen at the end of summer too. 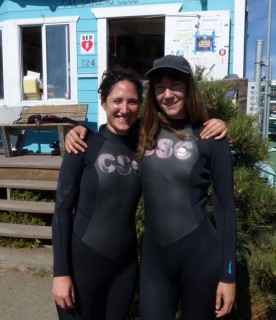 The club has new wetsuits from Xcel Wetsuits and so far they've been a smashing success with sailors and windsurfers alike.To keep our wetsuits from turning into swiss cheese, take a moment to review the guidelines for wetsuit wear at CSC:

- Find your size - hold up a suit to your body and see if the crotch and neck line up, that's a good starting place. Your wetsuit should fit like a glove, but not like a noose - if it won't zip, get a larger size. Wearing ankle socks will help the suit slide over your heel so you don't have to yank on it with your sharp fingernails.

- Wear a bathing suit under your wetsuit - you never know when you'll end up with the suit with the peekaboo crotch, and being able to strip down to swim trunks makes it easy to rinse off your wetsuit when you come off the water.

- Sailor must wear foulies over wetsuits - dinghies are the #1 cause of butt tears, stretched groins, and random punctures - even walking around in the crowded boat yard can be hazardous to wetsuits. Wearing foulie overalls over the wetsuit greatly increases their longevity and helps us save money for things like those shiny new Quests. 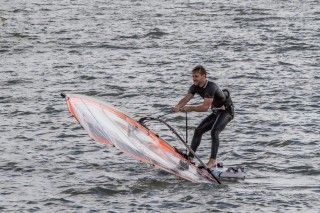 We get lots of emails asking about windsurfing lessons at the club.  There are full details if you dig around the website, but this is a slightly less formal overview.

Lessons are nominally 10.30am Saturdays and 11am Sundays.  During winter, we don't run Sunday lessons.  Sometimes you can get enthusiastic members or day leaders to give you a lesson at other times, but don't count on it!  The weekend mornings really are the best time to learn, due to the wind.

The lessons are about an hour on land, and then open-ended on the water, subject to tide and wind.

Yes, it's possible to turn up and pass the written test and self-rescue with a cursory introduction, but we discourage this, since much of the lesson is about club rules and safety (yours and ours).  If at all possible, please come to the weekend lessons. 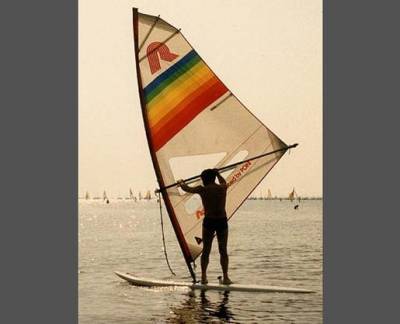 At least once a week, people offer to donate their "old", "beautiful", or "moved to kitesurfing" windsurfing gear.  We reject almost all of it. This post explains why, and gives an idea of what we do accept, for those wanting to donate.

It's All About The Age

As a general rule, we don't accept boards older than about 5 years.  This beautiful, 30 year old, original Windsurfer definitely doesn't qualify.  I don't care how much fun you had on it in the 1980s.

How about that 1990s board with all those footstraps on it?  Sorry, no.  And that beautiful fiberglass board? Still no. 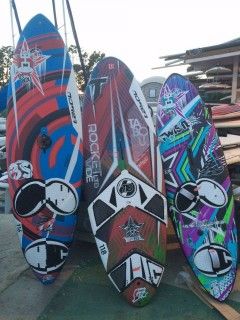 - 116L 3S: Everyone loves the 3S, a gybing and carving machine! Here is a floatier one for heavier windsurfers!

- 118L Rocket wide: Full carbon speed beast to blast around the bay even in low winds!